“Positive IQS performance is a tribute to the ongoing efforts of Nissan Engineering, R&D, Quality and Manufacturing teams around the world, as well as our many global supplier partners.” – Mark Swenson, vice president, Total Customer Satisfaction, Nissan North America

The J.D. Power Initial Quality Study is based on responses in eight categories from drivers who buy or lease a new model year vehicle after 90 days of ownership to determine which vehicles and automakers have the highest ranking in initial ownership quality and identify overall improvements.  Some of the categories include Mechanical – Powertrain Quality, Design – Body & Interior Quality and Overall Quality. 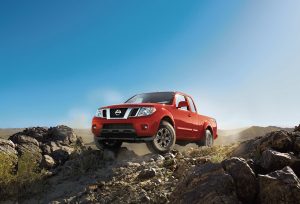 This is the third consecutive year that Nissan has made very significant improvements in the J.D. Power Initial Quality Study.  In this year’s study, Nissan has improved by eight problems per hundred vehicles (PP100) to an average of 85 PP100.  This is also the best performance of all non-luxury Japanese brands!  Having such high praise in this study is a good sign of customer satisfaction.

For the third year in a row, the 2018 Nissan Frontier was the top-rated Midsize Pickup truck.

The 2018 Nissan Maxima won the Large Car segment with the second highest scores of any vehicle in the 2018 study.

Impressively, the new 2018 Nissan LEAF improved by 17 points in this year’s study compared to its results in the 2017 study.

And finally, the 2018 Nissan Altima received top honors for the Midsize Car segment—sixth among all vehicles in the study and an improvement of 18-points since the 2017 study.

Plus, the Nissan manufacturing plant in Smyrna was awarded the Bronze designation and tied for third best in quality performance among North American Manufacturing facilities.

More from the Robbins Nissan Blog

Are you excited for the new 2019 Nissan Altima?

What is Nissan ProPILOT Assist and How Do You Use It?

Honda Accord vs. Nissan Altima in Humble

This entry was posted on Monday, July 9th, 2018 at 8:25 am and is filed under Nissan Accolades, Nissan news. You can follow any responses to this entry through the RSS 2.0 feed. You can skip to the end and leave a response. Pinging is currently not allowed.

Why Choose Robbins Nissan?
There are so many reasons we believe you should come to Robbins Nissan to purchase your next vehicle or schedule your next service appointment. The first of which is that we have an outstanding selection of new and used vehicles right here in Humble. We also believe we have the best staff in the Houston area. We have quite a few families with more than one member employed here and we pride ourselves on being a family-oriented business. We believe that extends to our customers. The members of our service center are also exceptional. They are knowledgeable, efficient, friendly, and look forward to servicing your Nissan right here in Humble, TX.

But perhaps what makes us proudest is our dedication to serving all of the communities in the area. Whether you reside a few hours away in Beaumont or Port Arthur, or are relatively close in communities such as Conroe, Katy or Cleveland, our staff will cater to your needs just as readily as we would for our local customers. We also happily serve the nearby locales of Spring, The Woodlands and Baytown, as well as our neighbors in Liberty-Dayton. Our team is more than willing to reach out to community members in Houston, Kingwood, and Crosby-Huffman. But we don't stop there, even drivers throughout Porter, Atascocita, and Pasadena have come to depend upon our sales, service, and finance teams who are always readily available to help. And how could we forget our friends in Cypress, New Caney and Tomball? Robbins Nissan accepts air checks! All buyers are welcome here, including college grads and first time buyers. We also have military discounts available to honor our service members. We serve them with quality cars, great service and good people. What more could you ask for from a car dealership?
Copyright © 2020 Robbins Nissan. | Contact | Terms Of Use | Sitemap | NissanUSA.com

We want to help you find the perfect car that fits your budget. Please adjust the options below so we can estimate the most accurate monthly payments.

How much will you put down?